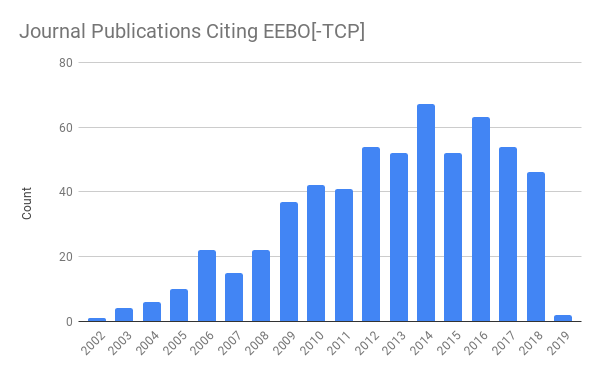 Figure 1: A cursory search of two major online databases of academic publications, ProQuest and ProjectMUSE, reveals that scholarly citation of EEBO in academic journals has steadily increased during the past two decades.

The ability to access an incredibly comprehensive series of titles in pre-1700 English print makes possible the previously unimaginable in scholarly inquiry. Before EEBO-TCP and the ability to search within its contents, the wrangling together of subcorpora for scholarly inquiry constituted a time-consuming and laborious process which few could have afforded: consider, for example, the case of “Reason the Unreasonable,” an English honors thesis that won EEBO’s own undergraduate essay competition in 2005 for its study of the last words of condemned Early Modern women as sourced in various texts, including broadsides and other ephemera, on the subject of women felons. Such a study would have been hardly possible without the student’s ability to access texts and generate a meaningful subcorpus at her own desktop, to say nothing of the unlikelihood of traveling to various libraries and collecting these materials within the short time constraints imposed by undergraduate semester schedules. The very nature of a comprehensive corpus such as EEBO-TCP, with its collection of approximately sixty thousand volumes by image sets and in fully encoded and searchable XML text editions makes it possible for users to not only uncover previously unexamined texts, but also to compare texts using advanced search functions–such as Boolean, proximity, bibliographic, and word index searches–to find lively ways of examining the horizons of Early Modern print through unexpected comparisons of texts.

As such, documenting the uses of the EEBO-TCP corpus is a dual challenge in uncovering its uses and describing the kinds of newer scholarly practices that are made possible through its existence and accessibility to scholars. The most obvious place to begin documenting the uses of EEBO-TCP in scholarly research, publication, and teaching is perhaps in a cursory look at online databases for scholarly publications. A search within two of the larger databases, ProQuest Lion and ProjectMUSE, revealed nearly six hundred unique article publications that cited or mentioned “EEBO.” The most common journals publishing these pieces are, perhaps unsurprisingly, the leading journals in Early Modern and Eighteenth Century English language and literary studies: ELH, SEL, Renaissance Quarterly, Shakespeare Quarterly, Shakespeare Studies, Spenser Studies, Studies in Philology, Eighteenth Century Studies, Eighteenth Century Fiction. Pedagogy also commonly appears, demonstrating that EEBO’s use as a resource for teaching the use of digital tools in a humanities classroom. This search, however, does not exactly reveal the use of EEBO-TCP as opposed to EEBO; those who cite “EEBO” might simply be reading image scans on the EEBO website of specific texts, rather than downloading and/or analyzing EEBO-TCP files, though the acts of searching on the website necessarily involve its hunting through the EEBO-TCP corpus to produce results.

The prevalence of citing EEBO has steadily increased over the past 15 years (see Figure 1, above), continuing the upward tick of scholarly usage first thoroughly documented in a 2013 study of EEBO-TCP users conducted by Judith Siefring and Jonathan Blaney (Sustaining the EEBO-TCP Corpus in Transition: Report on the TIDSR Benchmarking Study).1 This study surveyed over 200 EEBO-TCP users during 2012 to garner an understanding of their uses of EEBO and their general research and teaching habits, useful for giving the roughest of contours to understanding EEBO-TCP’s uses at six years’ remove. In 2013, 72% percent of active users reported that “EEBO is important to my field or discipline”; 59% reported that “EEBO makes new research possible”; and 26% reported that “EEBO is important to my teaching.” Users reported most often using EEBO as a “reference resource” (75% percent of users); to “consult image sets” (69%); to “consult full-text transcriptions” (65%); as a “research resource for manual analysis” (61%); for “full-text searches across the corpus” (55%); to “download image sets” (55%); “pursue personal interests/ research” (53%); “find materials to consult in person” (51%); to “find teaching materials” (41%); to “download full-text transcriptions” (38%); to “reuse/re-editing for new purposes” (12%); and finally, as a “source for quantitative analysis” (11%).

There are a few things to consider when extrapolating from this 2013 data into the many unknowns of how much users and their needs may have increased or shifted over the course of the past five years (a significant amount of time, it would seem, for the acceptance of digital tools and methods within “traditional” scholarly textual research). In the first place, the above, extremely rudimentary study of scholarly citation of EEBO might demonstrate that EEBO continues to be used regularly by scholars for their own research (into texts as it is traditionally conceived), as an online resource for textual analysis; in other words, that the texts as reproduced in EEBO-TCP are analyzed as copies of the originals housed in often distant archives, and the contours of research follow traditional methods of literary and cultural scholarship that assess individual texts through close reading. But as Blaney and Siefring have elsewhere analyzed, there is a distinct possibility that usage of digital resources, like EEBO-TCP, is often “hidden” in citational practices; as they state in a 2017 article: “many believe digital resources are, or are perceived to be, less reliable or not as good as ‘real’ (i.e. conventional print) resources.”2 In other words, we are not able to capture the full range of traditional textual analysis that has relied on EEBO-TCP, for the reasons that practices of citing EEBO and preconceived notions that undergird citation of digital resources both apparently remain matters of debate amongst scholars.

At the same time, a persistent rise in the use of digital tools and methods to construct new kinds of analysis has expanded the question of the use of such databases beyond their application as digitized reference texts. A search for articles within the two aforementioned databases that included mention of both “EEBO” and “distant reading,” for example, returned only seven articles, but all of them published in (2) or after (5) 2013—a small but noticeable uptick, but by no means an adequate way of assessing the impacts of the field of Digital Humanities upon EEBO-TCP’s user identities and their requirements. It would be most interesting to know, more specifically, how the availability of searchable text files, XML files, and EEBO-TCP metadata has increased the number of scholars who use these resources for distant reading approaches to corpus analysis, or for any other uses that might fall under the 2013 category of using EEBO-TCP as “a source for quantitative analysis.” Scholarly use of distant reading tools, search and analyses across a broader corpus rather than within individual texts, and machine learning tools such as natural language processing have generated both new means of accessing EEBO-TCP as well as new means of presenting and analyzing the corpus beyond traditional academic deliverables, such as journal articles and book chapters.

Additionally, the relatively recent presence of journals devoted to computational studies of text and culture (including of the “digital humanities”), such as Journal for Cultural Analytics (founded in 2016) and Digital Humanities Quarterly (founded in 2007) is a sign of increased avenues for publication of computational approaches to text; a 2018 entitled “Linked Reading: Digital Historicism and Early Modern Discourses of Race around Shakespeare’s Othello” is a prime example of EEBO-TCP’s being used for such scholarship.3 Cultural Analytics in particular foregrounds the data used by authors in their publications so that readers may peruse and analyze data on their own; part of a remarkable shift in the circulation of scholarly work that illuminates the research and analysis practices that are often veiled in the processes of scholarly publication. Here, the conversation circulated between an article’s author(s) and its audience would seem to lengthen the “live” nature of a published piece, as readers are impliedly invited to communicate with authors and with each other through the perusal of online data repositories and by email (Cultural Analytics publishes bylines that include author email addresses in hyperlinks).

The means of tracking EEBO-TCP’s use will need to account for the shifts inherent in scholarly fields that draw on digital tools and methods towards ongoing projects and potentially away from traditional methods of humanistic inquiry and publication. The Text Creation Partnership has kept track of live and past projects that use TCP in these various ways. Scholarly online editions reliant on EEBO-TCP corpora include Oxford University’s Holinshed Project, Washington University’s Spenser Archive, and Texas A&M’s Digital Donne. Online projects that draw on EEBO-TCP in addition to other digital resources as part of a cohesive digital project include Witches of Early Modern England, a cross-corpora search platform for finding texts relating to early modern witchcraft; Early Printed Poetry Miscellanies, 1557-1621: A Digitised Edition, a digitization of Elizabethan poetry anthologies; Lexicons of Early Modern English, a historical database of Early Modern dictionaries; the Map of Early Modern London, a series of interoperable projects mapping Early Modern London by people, places, organizations, and bibliography; the Virtual St. Paul’s Cathedral Project, which uses 3-D visual and acoustic modelling technology to digitally reproduce the experience of listening to John Donne’s Gunpowder Day sermon in 1622; Shakosphere, a tool for networking data about Early Modern authorship, print and publication actors; and Early Modern Print, an EEBO-TCP text mining resource with tools for N-gram browsing and searching for keywords in context.

These are all ongoing funded research projects that may involve a variety of principal investigators and other participants, generally leading to written reports and analysis for the audience of a various online project, conference audiences, as well as for article publication. Blogs managed by these projects, or by individual digital humanists (Ted Underwood and Scott Weingart are prime examples of deeply engaged DH bloggers), as well as social media (predominantly Twitter) are both places to examine the bustle of activity centered on the use of EEBO-TCP data. And considering that many of these projects have their own users who mine the materials of a project as presented for their own research, and in many cases contribute to the project through corrections, annotations, add-a-thons, and other means of enriching a project’s data and metadata, the uses of EEBO-TCP ought to be said to have expanded into layers of more immediate and more indirect users; a user of, say, Early Modern Print does not even have to use EEBO-TCP interfaces to initially connect with its data. In other words, EEBO-TCP’s uses are expansive and not always easy to track the way one might comb over visiting logs for a particular physical archive, or peruse publications on a particular subject, due in no small part to the transformative effects of digital tools and methods upon traditional practices and products of humanistic inquiry.